Thoughts turn to romance in spring — and to home makeovers.

The DIY boom that began in earnest at Easter, will gather force over the Bank holidays that lie ahead in May and June.

But before you pick up a paintbrush or invest in new cushions, it makes sense to familiarise yourself with this season’s trends. 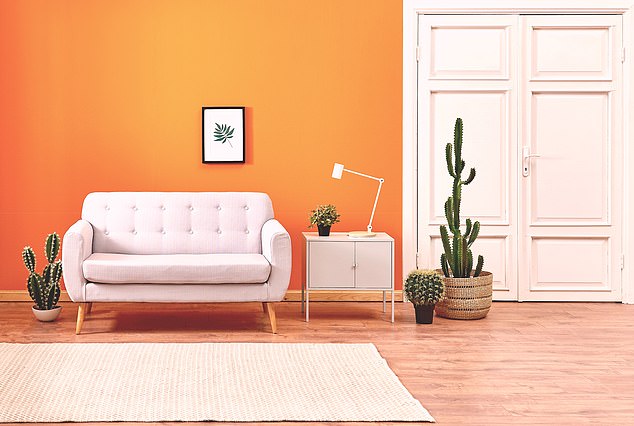 Fresh look: Bright walls and indoor plants will freshen up any room in time for the summer

The return of colour is not only one of the defining trends, it is the trend of the decade, says Crown paints consultant and lecturer Neville Knott.

He believes we are only on the cusp of a colour revolution and will become even more adventurous.

Violets, pinks and oranges are gaining a following. But the colours of the skies, oceans and parks are at the top of the list, with the seaside a particular inspiration.

Norfolk paint manufacturer Fenwick & Tilbrook even offers a Seabed shade, a green-brown inspired by rocks on the seabed.

The popularity of blues and greens began in lockdown, but they are still going strong, as the colours work well with grey and beige.

Crown describes its Liminal range of understated green hues as ‘an ode to the natural world’. Curiosity is a subtle lighter green. Collage is deep and sumptuous.

Teal, a blue-green, is in the ascendant in paints and furnishings. Charlie Marshall, founder of Loaf, says the number one fabric choice at his furniture firm is Sopping Seagrass, a teal. Also popular are two other varieties of this shade — Rockpool and Teacup.

If you don’t want to fully commit to colour, paint a feature wall in a bold, dark shade, or hang a dramatic floral print for the Bridgerton look, another key spring 2022 trend. Coloured cabinetry is another option.

One phrase that you will hear a great deal is ‘biophilic design’. The concept connects the inhabitants of a home with nature, and you can follow the trend by simply adding more plants, real or fake. 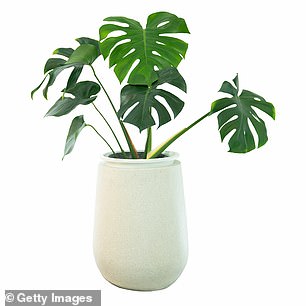 Adding greenery, such as this monstera plant, to a space is on trend for Spring

The quantity of vegetation depends on personal taste.

Some are espousing ‘jungalow’ (jungle and bungalow) a cosy aesthetic with a superabundance of greenery.

Others are less keen on being ‘plant parents’ (another new phrase) and believe that less is more.

Potted plants are a nod to the 1970s aesthetic, which also includes earth tones and low-slung furniture.

Sustainable materials such as bamboo demonstrate an awareness of the biophilic trend and environmental concerns.

The sleek lines of 1950s and 1960s Scandinavian furniture may never fall out of fashion. 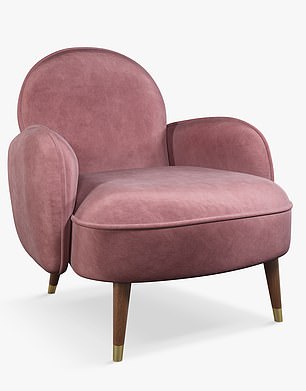 But there is a new fascination with curvy art deco style from the 1920s. Andrew Tanner, design manager at Habitat says the era’s ‘voluptuous and cocooning’ shapes are the inspiration for its occasional chairs such as the Ronda (£280).

Curved armchairs can be found at other High Street stores including John Lewis, whose Anyday Cove armchair costs £279.20 and comes in midnight blue or blush pink velvet.

The £975 Luna sofa from Oliver Bonas in burnt orange velvet is suitably sinuous.

A curved floorlamp can also be a sculptural piece. The Benson from BHS costs £110. The large Arc Overreach floor lamp at Made.com is £170.

Other makeover plans should include reusing and recycling. So, if you still have a Union Jack cushion from the Noughties, bring it out for the Queen’s jubilee. Auburn Fox sells new ones, priced from £22.99.