As part of our interview series, My Happy Home, we sit down with Anna Campbell-Jones to find out about her ‘incredibly robust’ kitchen, her favourite spot in the garden, and why she’s been known to skip dive and check back lanes for hidden treasures.

Anna, one of the judges on Scotland’s Home Of The Year, is an interior designer and design consultant who runs Habitus, an interior design business based in Glasgow. Anna lectured in Interior Design part-time at Glasgow School of Art from 2000 to 2018, and she currently lives in a traditional Glasgow tenement with her partner.

What makes you happiest at home?

ACJ: Being reminded of family and their stories by the furniture and items that I’ve got up on the walls, that have either been handed down to me or given to me over the years, for all different reasons. I’m very keen on the idea that your home is a kind of biography or a narrative that tells a story and that there’s a comfort in that.

What is the best home bargain you’ve ever snapped up?

ACJ: I got an original Eero Saarinen side table in a charity shop for £15. The people running the charity shop had tried to cheer it up by putting a sparkly tablecloth on top of it. But I immediately saw the very distinctive white curve of the base peeking out underneath. And when I went into the shop to inquire about it, they said ‘oh, we just use that for display.’

Somebody had donated it to the shop and they thought, oh well, that will be handy for the display. But when I actually asked to buy it they were like, ‘£15?’ And I said absolutely. It’s got a couple of dents and scratches but that’s just part of its history, so I don’t mind.

Tell us about your favourite memory at home…

ACJ: I’ve got two red Barcelona chairs in the living room and when they arrived, I had barely finished unwrapping them before my two sons – who were really little at the time and were both just so excited by these shiny, red leather chairs – sat on one each. And because the chairs are quite springy, the boys were kind of bouncing up and down. So almost every time that I look at them, I have that lovely memory.

What is the best decorating advice you have ever received?

ACJ: Very simple; it’s just paint. Don’t overthink it, have a go, go a little bit bolder than you thought you wanted to because you never know. It’s only paint – you can always change it.

Where do you shop for the best homewares?

ACJ: Well, you can probably guess that I enjoy scavenging in antique shops and charity shops. Sometimes I even find things in the back lane that people have put out for the bin men.

If you could have a snoop around anyone’s house, whose would it be and why?

ACJ: Well, I’ve got two answers for that question. The first would be that of my fellow Scotland’s Home of the Year judge Michael Angus. I’ve never been to his home. That would be fun as I’d be very curious to see what it’s like.

But in terms of interior people more generally, I would love to visit the home of Edinburgh designer Wendy Morrison. She’s like a real, true maximalist. So much so that she makes me look like a minimalist. I would love to experience the spaces that she has created. She does loads of stuff with layering and pattern and texture and lots and lots of colour, so I’d love to experience that.

What is your most treasured possession at home? Why is it so special?

ACJ: It would be an oil painting of the view from an upstairs window at my childhood home in London. It was painted by a very, very dear friend of my parents, a Hungarian woman who was a survivor of the Holocaust. There’s something about it, even though it’s just a view of a window with a few potted plants on a windowsill and a distant view outside. But it’s just a very powerful painting and it always makes me think of her and of home.

What would your perfect night at home look like?

ACJ: A night in with my partner with a couple of Godfather cocktails, that’s a combination of Amaretto and whisky, on the rocks, a bowl of blueberries, some dark chocolate, the fire lit and putting records on my ancient 1980’s turntable. I enjoy rummaging through my vinyl collection and putting some random stuff on. A bit of jazz, a bit of soul, just whatever the mood requires.

What does your outdoor space mean to you?

ACJ: I live in a main door tenement and very unusually, I’ve got a front garden, so you actually walk through my garden to get to my front door. But it is quite a large and mature garden, meaning that it is rather private, and it has a number of really mature trees; oaks and a very beautiful cedar. I just love sitting on the bench at the bottom of my garden watching the birds fluttering about, even better if I’ve got a pal there and a cup of tea.

Which room do you spend most of your time in? How did you decorate this space?

ACJ: I would have to exclude my work space from that list because I do work from home, but it would be my kitchen. It is south-facing and really sunny, as a result. It’s definitely the sunniest room in the flat and I just really like sitting in there, whether it’s reading the paper or cooking or listening to music. And obviously, it’s where we all sit around the table, when the kids come over with their partners.

In terms of the design, before I did residential interior design I used to do commercial design and one of the things that I used to design quite a lot was restaurants. So, this is actually one of the first kitchens in a home that I designed. With my background being in restaurants, my kitchen is kind of like a catering kitchen. It’s all stainless steel, with very durable linoleum flooring, making it incredibly robust. It will last longer than me, I reckon. But I have cheered it up with some really strong colour blocking on the walls. And the table and chairs are actually from the meeting room in my Dad’s office, as I snaffled them when he retired. He actually originally got the chairs from a skip back in the day, so the whole skip diving, lane plundering thing runs in the family.

What would top your list for the worst decor trend?

ACJ: I don’t know if it’s going to make me enemies, but that kind of ‘luxe’ look with everything grey and crushed velvet, with crystals on things. I think it’s the sort of interior that people do when they are trying to project an image of themselves that’s not really necessarily who they are. That kind of interior, to me, is about keeping up appearances, instead of just being yourself.

If you could design your dream home, what things would you want to include?

ACJ: I absolutely love my draughty, ancient, slightly cracked tenement flat and I definitely wouldn’t want to ever live anywhere else. But I do absolutely adore contemporary architecture. I suppose my dream home would be a combination of those things, maybe. I do really like when an older building has been extended with something really contemporary, with lots of glass and I like that sort of clash of minimalism and older architecture.

But, in terms of a more realistic goal, I’m hoping that technology is going to be created that would allow me to make this home a little bit more eco-friendly.

• Series four of Scotland’s Home Of The Year is now available to watch on BBC One Scotland, the BBC Scotland channel and BBC iPlayer.

This content is created and maintained by a third party, and imported onto this page to help users provide their email addresses. You may be able to find more information about this and similar content at piano.io 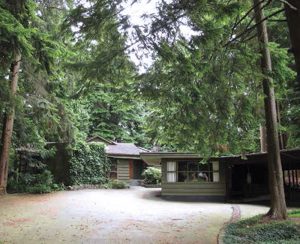