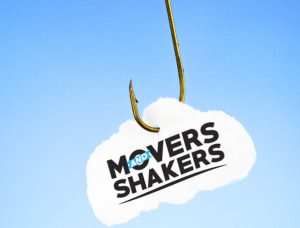 It’s hard to keep up with all the latest moves across media, marketing, and advertising, so we’ve made a list. Check out the biggest moves in adland this week.

LIzzie Young is leaving Nine Entertainment to become Australia CEO of WeAre8, an advertising platform that donates part of its revenue to charity, founded by Sue Fennessy who also started Standard Media Index. Nine’s managing director of local markets and group marketing had been a candidate for CEO at Nine but Mike Sneesby, then head of streaming platform Stan, won that contest.

Think HQ appoints Oliver Laude head of digital
Oliver Laude has been appointed to Think HQ as head of digital. He joins from CHEP (now CHEP Network), where he spent close to three years overseeing client partner technology and as director, technology consulting. Laude will work in close collaboration with all other disciplines offered by the agency to lead digital services for clients, oversee all digital projects and consult with clients on their digital ecosystem to maximise ROI.

Brendon Cook joins Beatgrid board
Brendon Cook, the founder and former CEO of oOh!media, has joined the board of directors of cross-media advertising measurement adtech Beatgrids. Daniel Tjondronegoro, co-founder of Beatgrid: “He brings a wealth of expertise to our out-of-home advertising measurement improvements and is already adding value to our expansion in Australia.”

Leilani Vakaahi joins Komo as partnership manager
Komo, an audience engagement SaaS platform, has appointed Leilani Vakaahi in the newly created role of partnerships manager. Vakaahi brings a decade of experience in the media industry, with roles across radio and digital audio in Sydney, London and now Perth, including agency account director at ARN.

Brett Dawson promoted to M&C Saatchi group role
Brett Dawson, the founder and CEO of Bohemia, has accepted a new role in the M&C Saatchi Group, based in the UK before a 2023 return to Australia. Dawson will be building media and commerce capabilities for the global network working closely with Justin Graham, the CEO of M&C Saatchi in Australia, and James Hilton, founder of M&C Saatchi Performance.

Milk+Honey United’s Steve Jackson appointed to The One Club for Creativity International Board
Steve Jackson, cofounder of Milk+Honey United in Sydney, has been appointed to represent Australia on the International Board of Directors of The One Club for Creativity. Jackson will provide input and feedback on the club’s ongoing global programming and connect the club with advertising and design universities and schoolsJackson is among a group of 22 creative leaders from around the world who will begin three-year terms on the International board.

Have something to say on this? Share your views in the comments section below. Or if you have a news story or tip-off, drop us a line at [email protected]