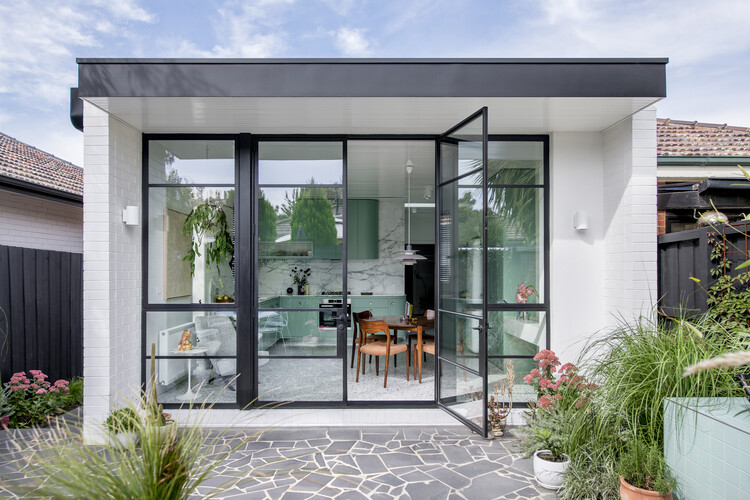 Text description provided by the architects. This 1940s semi-detached brick home in Melbourne Australia has been treasured by the same family since it was originally built. The current owner, the great grandnephew of the original owner, was keen to honour its heritage in as many ways as possible. In its long history the house had largely gone untouched, so many of its lovely old features were still intact. However, there comes a time with every home where an old Kitchen, and degrading Bathroom, need an overhaul to bring them up to contemporary living standards and to provide for a long life ahead.

The most challenging design aspect of this project was picking and choosing which heritage aspects to work with for inspiration, and which ones to let go of. It’s a fine line between honoring the past and creating a home that suits current times and into the future. The overall layout is a good example of this – a combined open Kitchen and Meals is counter to the way houses were built and planned in the 1940s in Australia but now we put a huge importance on sharing these spaces and connecting them to the outdoors.

As with much of the detailing, the materials were largely inspired by the existing home and references to the construction of the era. In addition to the Kitchen colour, we designed a contemporary fluted glass cabinet display and used the same glass for the Bathroom glazing. Square glazed ceramic tiles and steel framed windows were also cues that were taken from the era. Brick was used for the small extension with a subtle stack bond detail on the wall ends. In addition to terrazzo tiling of the floors and steel framed windows on the northern façade addressing the Backyard.

The existing building directed the design including the re-model and the extension. The Front Entry, Bedrooms and Living room were maintained. At the rear of the home, we completely gutted the interior, made this area slightly larger, relocated, rearranged and replaced the service rooms and opened the new Kitchen and Meals area onto a freshly landscaped Backyard so that the open plan area is more suitable to contemporary standards.